It’s Thursday morning in Manchester (UK). For the first time, I’m traveling to this historical city for a day-and-a-half conference on the “practice of practise.” My word processor doesn’t like the second spelling of this word! Thanks perhaps to Noah Webster and George and Charles Merriam, in the US we prefer not to distinguish between the noun practice –“a way of doing something that is common, habitual or expected”—and the verb to practise –“to do something repeatedly or regularly in order to improve one’s skill”—, like the Oxford dictionary does. Turns out that, for some of my colleagues, the research we do and publish has gotten too disconnected from what practicing (or, should I write “practising”?) managers do and a few dozen researchers have been invited to study this notion in some depth.

I must confess that I feel incredibly honored and maybe even a bit intimidated, as I am the least known researcher in the list of conference participants. But just yesterday, I received an email that boosted my self-confidence highly, as I was invited to give one of the keynote speeches in another conference that will take place in Bamberg (Germany) in May. The paper I sent was blind-reviewed by two referees who rated it very highly, and the organizers felt it was worth giving it more air space than what I had expected. I know Mamá will be proud of me, even though she rarely needs a reason to do so. But enough about me; I thought I’d share with you this month some of my thoughts (the “stream of consciousness”) as I visit this “brilliant” city and here I am wasting valuable air time talking about myself.

Well, as I said above, I have just arrived in town; consequently, I feel slightly jet-lagged. Coffee here is much stronger than what I usually get in Clarion, plus I am excited about this event, so, I think I will get by. I took the train from the airport to the downtown area where the Manchester Business School is located and was reminded that they don’t call it “English punctuality” for nothing. I was trying to make sure I was boarding the right train when the time came, and off went the first I should have boarded. Fortunately, service is offered frequently, so, I was able to reach Manchester within a few minutes on the next train (note to self: stop trying to double-check everything; it’s not like you’re using an unfamiliar language, even if it sounds so!).

I had time to take a few pictures, read the “Metro” newspaper, and review the city maps so I know what to do once I reach downtown. Not a hard task, since the city has enough signs indicating street names and routes. At this point, I’m feeling hungry, even though it’s not even 6 AM for my body clock. I find a little café in one of the alleys perpendicular to Oxford Street, where I have my first English breakfast in Great Britain. I have heard so many times that “to eat well in England, you have to have breakfast three times” that I am ready to experiment –hoping I don’t get “King Henry’s revenge” just like our Anglo cousins often get “Moctezuma’s revenge” when visiting Mexico. I have to say I am not disappointed. The egg and patty are not different from what we’d find in the US, but the sausage tastes a bit different –and very enjoyable! The toast is also good flavored, but the sweet flavor in the beans is not what I am used to, yet I like being able to savor unfamiliar tastes. I also tried the decaf coffee but it tastes too much like the instant brand I use in my office when I feel too lazy to brew a better cup.

The newspapers here seem to be fascinated by the encounter of South African President, Jacob Zuma –and his third current wife—with Queen Elizabeth and Prince Philip. Zuma grabbed the press’ attention by demanding respect for his culture –apparently somebody told him that Britons do not approve of polygamy or out-of-wedlock offspring, and that has started a media frenzy like only the British Royal family can spawn.

Make that “After a 2-hour nap...”! I did not really feel that tired until I thought I should feel the bed in my small room. OK, I’ve seen smaller –in Hong Kong!—, but I’m always amazed at how easy it is to get used to our jumbo-sized rooms in the Americas. I exercised a bit, shaved, took a shower and got ready for the initial meeting downstairs.

It’s a neat group of colleagues! We have so many things in common, in spite of coming from such different countries as Austria, Brazil, Cyprus, Denmark, Finland, France, Ireland, New Zealand, Norway, Poland, Scotland, South Africa, the US (and I cannot help mentioning “originally from Mexico”!), and, of course, our British hosts. Our dinner is not another English breakfast, but I enjoy it very much. Then it’s time to work –crazy, isn’t it? Well, we have to take full advantage of our being together here for a day and a half, to continue the work we have been doing for several months already and into the future.

I’ll post a picture or two on my blog if they turn out “sharable.” I think I have already exceeded the preferred length for this month’s column. Thanks for reading, I look forward to your “stream of consciousness”! 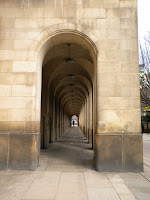 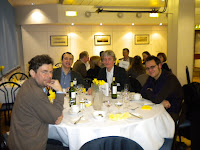 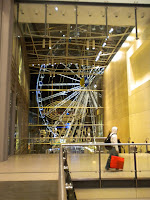 ¡Hasta la próxima!
To learn more: Antonacopoulou, E. P. (2009). On the practise of practice: In-tensions and ex-tensions in the ongoing reconfiguration of practices. In D. Barry and H. Hansen (eds) Handbook of New and Emerging Approaches to Management & Organization, London: Sage.
No comments: