…I am the master of my fate | I am the captain of my soul. – Last two verses of Invictus, by W. E. Henley

You know that you’re traveling too much when you see the same movie in two separate business trips. This is the case for me this summer, but I am not complaining, as I have very much enjoyed Invictus both times –the movie about South Africa’s underdog participation in the 1995 Rugby World Cup, starred by Morgan Freeman and Matt Damon.

The movie was well-timed, as the FIFA World Cup is still being played in South Africa as I write these lines. Several of our naturally favorite teams have already advanced to the second stage –most notably the USA, Mexico, Uruguay, Argentina, Paraguay, Spain, Brazil, Portugal, and Chile, some of which may still go beyond all expectations!! In the process, from the 11th of June to the 11th of July, the world will have learned a bit more about South African geography and history. Personalities from South Africa and other participating nations will have received more media attention than usual; and firms sponsoring all related events will have earned goodwill from soccer fans and many others worldwide.

I enjoyed this movie for many reasons, including the fact that I love participating in and watching sports just like the next person. I also consider the fall of Apartheid in South Africa one of the greatest historical events in my lifetime, along with the fall of the Berlin wall. I wish we could see something similar in the near future between the two Koreas and in so many other conflicts in Africa, the Middle East, and even in our own continent, where violence, separating walls, and many types of discrimination still run rampant. As the Spanish saying goes, ¡La esperanza es lo último que muere! (Hope dies last!)

Another important reason why I feel this movie deserves attention is the transformational and charismatic leadership exhibited by Nelson Mandela (Freeman’s character in the movie) and by François Pienaar (Damon’s character, the captain of the South African team). One can almost feel how the South African team grows in esprit de corps as the movie advances and they realize that the world, and –most importantly—their own nation change their perception about what can be achieved when people put the past behind and work together for a better future. This type of leadership and change is needed in many organizations that have been decimated by recent layoffs or merged with others as our economy emerges from the recession and new business realities have to be dealt with. 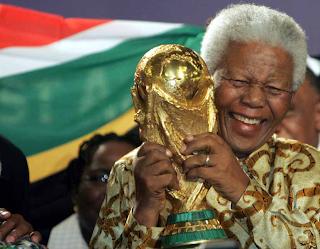 Nelson Mandela in 2004 with the FIFA Cup, after South Africa was Awarded Hosting this Year’s Championship.
Photo Credit: FIFA World, June/July 2010.
I could not help feeling a bit of sadness when I learned that South Africa is the first host nation for the FIFA World Cup that does not qualify to the second stage of the tournament. Still, as the host nation, South Africa will have brought between $1.1 and $1.5 billion to its local economy. Airports, roads, stadiums, and more infrastructure will have been renovated and hopefully, the dream of making the world a little more peaceful through sports will have been achieved.

Local businesses also benefit around the world. While it might be true that soccer does not attract audiences in the US like it does in most other nations, we know that there are several local and regional markets in which this sport generates just as much passion –and consumption! Among my acquaintances, I perceive a stronger inclination among Hispanics to follow the World Cup, although I also remember my own –very much Hispanic!—mother being tired of her teenage son watching so many games in such a short time a few years ago –OK, more than just a few...

Mass media and sponsoring multinationals tend to be among the biggest winners, but even Mom & Pop’s restaurants around the world draw significant crowds when the locals gather to see the next big game with other fans. Of course, there is also the danger of collective euphoria going wrong as it often happens after major competitions hold their title games. We only need remember what happened in Los Angeles a few weeks ago after the Lakers won another basketball championship against the Boston Celtics. Again, while I would hope that unfortunate events like these do not occur when the final game of the FIFA Cup is played, a certain level of caution and prudence are advisable. I sure hope that the Cup is earned by one of our Ibero-American nations this July (yes, this “region” includes the USA, Brazil, Spain, and Portugal)!

What do you think? Are you also keeping track of several teams during this tournament? Or, are you tired of so many grown men running after a little ball, like a good uncle of mine has been heard saying? Is your business in some way supporting or being supported by major sport events like this? If you would not mind sharing your thoughts on this matter, send me your comments via email to drolivaslujan_at_gmail.com or by posting a comment on my facebook profile. I look forward to hearing from you!