Many times I’ve heard authors talk about their latest publication as “their baby” –in fact, I have used this metaphor several times, especially when I show the results of my efforts with colleagues or friends, after months of thinking, writing, analyzing, submitting manuscripts and responding to reviewers and editors.  Well, a few days ago, I received my newest “baby,” the “ba-BJHR” or Business Journal of Hispanic Research, first issue of its fifth volume, and I can hardly wait for opportunities to talk about it!

The funny thing is that I only wrote one page in this issue.  But I can tell you that I spent many more hours, energy and effort as Editor-in-Chief of this issue than I have for many other publications, even those in which I am single or first author.  Coordinating the efforts of twenty-six highly qualified individuals who so conscientiously wrote their manuscripts to be scrutinized by our editorial boards –another forty, highly qualified, well known individuals from industry and academia—and several ad-hoc reviewers is an experience in interdependence that I had never had before.  I sure hope that many conscientious managers and researchers will agree with us that this issue is full of helpful, relevant advice, distilled through rigorous methodologies.

I believe that this is one of the clearest ways in which NSHMBA distinguishes itself from other organizations that only have a yearly event or two to serve their stakeholders! And this is one that creates a tangible legacy for generations to come!

Let me share with you how this journal is different from other business publications.  First and foremost, most of the authors are highly trained individuals: you will notice in its index and Contributors section that all have finished graduate school and most –over 80%--have doctorates.  Secondly, there are five sections in this journal, three of them written mainly for the thoughtful manager who wants her or his practice to stay away from fads and “intellectual snake oil” –the Executive Articles, Summaries, and Book Reviews—and the other two sections –the Academic or Scholarly Articles and the Research in Progress—are written mainly for business scientists and researchers, who report their work in a more technical fashion.  All the content is intended to document how Hispanics in business have different sets of circumstances than the rest of our society, and provide information that will not just be rigorously distilled, but also highly usable.  Lastly, while the BJHR, like most journals, is distributed through libraries and electronic databases, it is also sent directly to NSHMBA’s sponsors and partners, both academic and industrial; to chapter presidents and to subscribers.  This increases the chances that it will be read and used actively, not just found occasionally.

Have you ever noticed how some blue-collar workers seem to be more stressed than others?  Dr. Carol Howard and her co-authors from Oklahoma City University and from the U. of Tennessee -Knoxville surveyed not just workers but also their supervisors to examine whether ethnical matches made any difference on job stress and burnout.  They found measurable differences in stress levels, on burnout and on intent to turnover, but Hispanics appeared to be more vulnerable to ethnic mismatches than their Anglo counterparts; for that reason, they recommend a focus on job design for Anglo workers and on perceived ethnic fit for Hispanic workers.  But don’t take my word for it; read the full article on pp. 54-71 so you can draw your own conclusions!

You might also have noticed that some organizations have Diversity Management initiatives that are readily accepted, whereas other organizations struggle to find support for them, even among the employees that are expected to benefit.  Dr. Richard Herrera from Texas A&M in Texarkana and his collaborators from Our Lady of the Lake and UT-Dallas have been able to find empirical support for a number of relationships that link cultural descriptors with leadership preferences and ratings of diversity management.  Among their recommendations, Human Resource and other managers of people might do well by promoting a collectivistic rather than individualistic culture to increase the acceptability of their diversity practices.  Again, I invite you to read the full report on pp. 72-85.

Now, if you have been following the debates over illegal immigration and how the local and state debates may impact businesses –hey, your business might have experienced some of these concerns!—you will be interested in a case study that Dr. Mark D’Antonio and his colleagues from Northern Virginia Community College wrote.  This review of the legal precedents and justification for Affirmative Action programs, not just for compliance but from a competitive advantage perspective will put you –or your trainees—in the driver’s seat.  In addition to the case printed on pp. 86-97, there is a full set of teaching notes available from the Managing Editor of the BJHR; they are free for qualified instructors with a current subscription to the BJHR, but others who are not so close to NSHMBA may also purchase the teaching notes in electronic or print form.

Our Executive sections include articles on entrepreneurs and services offered to them, on academy-business collaborations and academic inequality, a couple of summaries that address differences on Hispanics’ happiness and job-related stress levels, in addition to two reviews of highly relevant books.  From well-known to recently minted academics from universities like Indiana, Tulane, UT-San Antonio, Saint Xavier, Quinnipiac, Marymount, and Clarion are present in these articles.

And, did I mention that NSHMBA Premier and Executive members have online access to the electronic version of the journal included as a benefit of their membership?  All you need to do is login to the NSHMBA site and continue your professional development through reading and internalizing the information in this multi-disciplinary effort by businesspersons and academics.  As always, I look forward to hearing from you via email or through my social networking pages (please remember to let me know that you’re a fellow NSHMBA member if you send me a connection request).

Love is definitely a many-splendored thing...

In the 17th Century, from 1632 through about 1653, the emperor Shah Jahan built what we now consider one of the wonders of the world, a UNESCO World Heritage Site.  Tradition says that he built this gorgeous building as a mausoleum to his third wife, Mumtaz Mahal, who died while giving birth to their 14th child.  In preparing for this writing, I couldn't help but admire the beauty of this monument (click here for a great picture of the Taj Mahal in Wikimedia Commons). 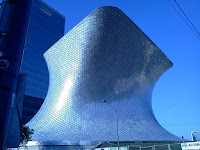 In a quite different time and latitude, I felt privileged to visit the Museo Soumaya a few weeks ago.  Built as a memorial to Soumaya Domit, Carlos Slim's late wife, I realized that one might need a full week to truly admire the panoply of works collected by Mr. Slim.  I had already heard of his impressive collection, but walking around the museum to be exposed to art ranging several centuries and cultures was quite an experience. 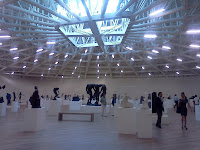 Popular or classic; Mexican, European, Asian; pre-Hispanic, colonial, or modern; sculptures, paintings, and reliefs; sacred and profane, are just a few of the labels that may be applied to the wealth of large and small pieces that are currently open to the public in a Southern neighborhood of Mexico City.  Da Vinci, Toulouse-Lautrec, Picasso, Dalí, Rivera, Renoir, and Van Gogh are some of the most famous authors whose work can be admired by anyone willing to spend some time in this mausoleum.  Along some of these pieces, we find paintings and other works whose authors have been lost, but the products of their talents have not.  And we can even find out about several Mexican artists who never reached the status that Rivera or Kahlo have recently been given, but their creativity was diffused throughout the nation, if not the world, albeit at a different scale. 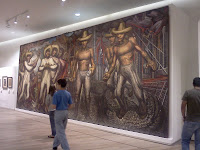 Clearly, my comparing the Soumaya Museum with the Taj Mahal may be considered far fetched in more than way.  In addition, I don't consider myself an art critic; even if I worked for a couple of years in a museum (Monterrey's Centro Cultural Alfa, another so-called vanity or industrial philanthropy museum), my work and my studies have always been centered around computers, businesses and international matters.  Still, whenever I travel, I try to give myself an opportunity to visit museums or attend local performances.  I would hardly be called a connoisseur, but I am grateful that I have enjoyed collections in Mexico, the US, Canada, Spain, Greece, Egypt, Italy, France, the UK, Thailand, Indonesia, and a few other places that I don't have in the top of my mind right now. 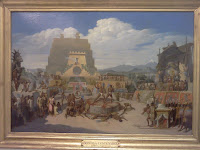 Other individuals, obviously more qualified to review museums published their opinions earlier this year, when this place opened its doors.  To illustrate, the Wall Street Journal offers what I would consider a balanced --if at times snobbish--article, while critics writing for the LA Times did not hide their disappointment.  For you, who might not have a trip to Mexico City scheduled in the short time, I would recommend visiting the Soumaya museum's website, and decide for yourself whether a day (or more!) is worth your time. 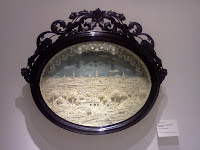 I, for one, thoroughly enjoyed my visit.  I am not positive that my 14-year old son and my 12-year old daughter were as impressed as I was.  But I definitely hope that they will now be able to associate some of these works with the names that they might read about in their history or art classes.  I also hope that one day, they will be able to recognize in this museum, one of the most notorious philanthropic actions of a man who is both admired and criticized in their lifetimes: Carlos Slim has been identified as the richest man in the world for a few years now, and he has achieved this status in an economy that is characterized by its lesser development and blatant, if not painful inequalities. 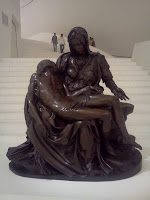 This might be one of the largest gifts he has offered to the city that has given him fame and fortune.  Few individuals will ever have the ability to give free access to anyone with time and interest to a collection this massive, this diverse, this impressive.  Carlos Slim has done it --and I hope this is not the last time we learn about ways in which he gives back to a country that cannot afford to focus exclusively on basic needs or on the success of its teenage (U-17 or under 17) football players. 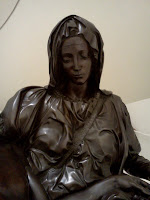